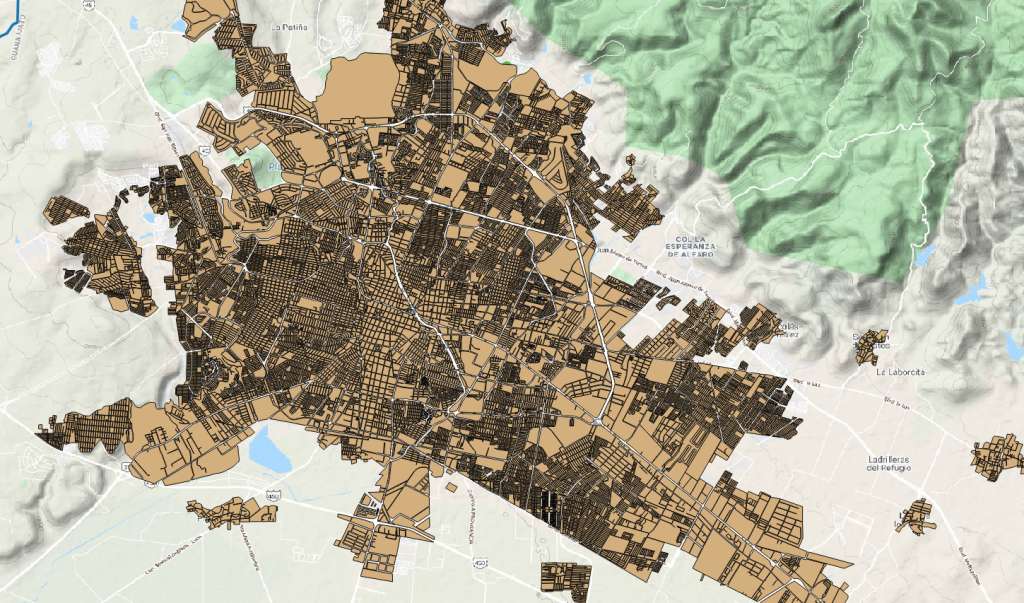 It's been a few years since we took some time on this blog to talk about Mexico's Censo program (run by an organization named Instituto Nacional de Estadística, Geografía e Informática, best known by its acronym INEGI). Specifically, we want to do a deep-dive into the methodology and key vocabulary when it comes to INEGI's geostatistical boundaries, and particularly the urban boundaries of Mexico. While it's possible to look at Censo 2010 (and soon Censo 2020) results in a tabular way, the best insights seem to come when marrying together that tabular data with the boundaries that correspond to them on the map. That's hard to do without a firm grasp of how those boundaries were built, why they were built, and what's the 'fine print' a user should be aware of before putting these census data on the map. (Of course, there's tons to know and not all the info about Mexican census data can fit into one blog post, so contact us for an even deeper dive.)

Mexico's census program makes use of a nesting hierarchy of geographical boundaries. Technically, let's call them geostatistical units. At the very top of the hierarchy is (duh) the Nation, and the Nation is made up of States. Actually, in Mexico, the Nation is not simply made up of states -- it is made up of what you would call Federative Entities (Entidades Federativas). That's because Ciudad de México is technically not a State, but for census purposes, 'looks and acts' as if it were a State. In many ways, CDMX fills a similar function as the U.S. District of Columbia. In Mexico, there are 32 federative entities (31 States plus the Distrito Federal, a.k.a. Mexico City). One key thing to remember: the Entidad Federal is as much a geopolitical unit as it is a geostatistical unit. Meaning, there are uses way beyond the Mexican census for State boundaries, and if you ask anyone where they live, they're guaranteed to know their Entidad Federal.

Similarly filling those two distinct roles is the Municipio (roughly, Municipality in English, though they look and act kind of like a hybrid of a city and county government). They are political units, where campaigns are run to assume the Presidencia Municipal, an elected post similar to a mayor). Each Mexico Municipio has a seat of government, which is often (not always) the largest settlement in the Municipio. Note that in many cases, the seat of government is located in what was formerly the largest settlement in the Municipio, which in some cases nowadays are teeny tiny hamlets. The giveaway that you're in the, let's say, capital city of a Municipio is that you'll see a Palacio del Gobierno, which houses the municipalities government offices, and most of the time is located on a major town square along with the biggest or oldest Catholic church in town.

But enough about the political nature of a Mexican Municipio. Municipios, of which there are nearly 2,500, are also one of the most important Census boundaries for Mexico. They serve an important role in allocating public resources, which is a basic function of the Censo. They're also quite handy for business analysts performing demographic research, not only because of the Censo 2010 data (and soon Censo 2020 data), but also because they are a common boundary with other data sources independent of INEGI Censo programs. For example, want to get an idea of how many private vehicles are registered in a Mexican municipio? Easily found via a compilation of data provided by Municipio governments to a central government database. Roll-ups of crime data? Also provided at a Municipio level by the local governments. The Municipio is important for demographic data analysis in Mexico because it allows the analyst to mash up population data from the Mexican Census with other datasets that are more recent or more narrow in focus. Oh yeah, the other thing worth knowing is that this is the smallest geographic boundary in Mexico that covers 100% of the territory, with no distinction between what's a rural area and what's an urban area.

A sub-division of Municipios is the Localidad Urbana, or urban locality. This is one of our least-favorite geostatistical units, simply for the reason that they don't provide much more than a Municipio does. There are fewer than 5,000 of these, meaning an average of less than two per Municipio. Unlike Municipio boundaries, where ancillary data can easily be matched up and mashed up with Censo 2010 or Censo 2020 data, Localidades Urbanas seem to be rarely used by other primary data collection organizations in Mexico. Sure, there's a time and a place to look at Localidad data, but most demographic analysis is better served by skipping these entirely and moving on to the Urban AGEB, instead.

High-def demographic analytics starts with Mexico's AGEBes Urbanas (Urban AGEBs), which are purely geostatistical units (in fact, AGEB itself is an acronym for Área GeoEstadística Básica). Ask anyone their state and municipio, and they'll know it. They probably know their Localidad too. But only the nerdiest of all, or INEGI workers themselves, know or care what AGEB Urbana their home is in. AGEBes Urbanas are somewhat arbitrarily drawn about a year before the Censo by a team of INEGI cartographers, usually with reference to natural geographical and infrastructural breaks (rivers, roads, etc.). They are used for data analysis in many government, academic, and private-sector demographic research programs, and they are sometimes appended to points-of-interest (like Mexico Business Locations) to facilitate match-ups between Mexican Census and Mexican POI data.

Nonetheless, Mexican Censo 2010 and Censo 2020 Urban AGEBs are mainly used for demographic analysis, such as trade area analytics, market planning, etc. In some cases they can be used in conjunction with customer intercept data (home address, colonias, Códigos Postales) to infer a likely socioeconomic class, income level, family size, or other demographic characteristic. There are literally a couple hundred INEGI Censo variables associated with each AGEB. (These AGEB-level data form the base year for GeoAnalitica's most popular products, and these are the data that we growth-adjust to come up with current-year Mexico demographic data and estimates each year.) There were over 56,000 AGEBes Urbanas in Censo 2010, and there will be even more come Censo 2020.

A final comment on the Urban AGEBs: they're called Urban for a reason. Outside of urban and suburban areas, they cease to exist (that's where AGEBes Rurales reign supreme, but that's a topic for another post entirely). But just because there's no Urban AGEB doesn't necessarily mean there's no urban-type housing. Basically, as most cities expand, they tend to grow outward and not upward. (Mexico City is a notable exception, as it's geographically constrained...and upward really is more cost-effective than outward.) So, even within months of Mexico's census results being published, the boundaries are already out of date. (We built our own 'synthetic' Urban AGEBs, called Growth Grids, to tackle exactly that problem. More on those separately.)

Digging even deeper than an Urban AGEB is possible, but not an avenue we suggest for most users. The Manzana is the smallest polygon-type boundary in the Mexican census, and is analagous to a U.S. Census Block. So why don't we recommend the Manzana? One reason is cartographic. INEGI delineates Urban Manzanas in a non-contiguous manner, meaning their border often don't line up, leaving blank space between them on the map that makes thematic mapping clunky and unappealing. But the bigger, and less superficial, reason to avoid the Manzana stems from a privacy issue. Censo 2010 and Censo 2020 have certain privacy protection mechanisms built in to their publicly disseminated data. If the count of people or households in a certain Manzana doesn't pass a threshold value, then much of the detailed data is zeroed out, theoretically to avoid the possibility of bad actors from knowing or inferring detailed data about a person based on their residence. A surprisingly large number of Manzanas have had much of their detailed demographic data wiped out for just that reason, rendering them useless for market planning research.

There are some other boundaries worth talking about, but we'll save them for some future posts. Check back in for future commentary on other censal geographies like Rural AGEBs and Rural Localidades, as well as non-censal geographies like Mexico colonia boundaries and Mexican Códigos Postales. We may even dive into a few point-type data resources, like Mexico business location data or even urban address geocoding. We love helping businesses dive into demographic data for their Mexico operations, so reach out if you have a question or a need. Thanks for joining us on this look at Mexico census data boundaries!