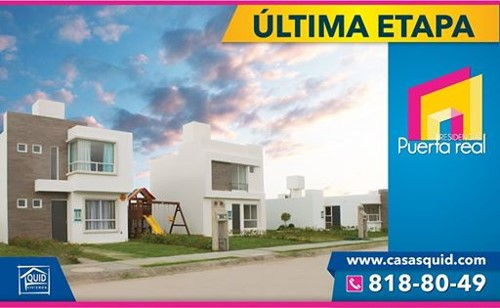 San Luis Potosí is riding the same wave as so many of its neighbors.  Good quality of life, a stable security situation, and a central location coupled with great infrastructure make for a booming local economy.  The expansion of middle-class jobs in SLP has created a significant demand for new housing, and true to form, developers are building to meet those needs with high-density single-family homes.

Today, we’ll take a look at Residencial Puerta Real, on the northern edge of SLP.  It is quite literally “on the other side of the periférico”, situated along the urban ring-road in a way that allows its residents easy commuting to industrial outgrowth to the south and business centers downtown.  Puerta Real has been growing piecemeal, with initial phases starting just after Censo 2010, and new phases that -- even to this day – are being completed and sold to SLP’s burgeoning middle class.  (You can take a look at GeoAnalitica’s embedded Mapillary streetviews below, which we shot during our 2019 research trip to the Bajío region.)

Like so many other recent growth stories, you won’t find Residencial Puerta Real in any INEGI dataset.  How could it be, when it didn’t exist the last time data were collected?  Censo 2010 geography teams delineate boundaries (Manzanas, AGEBes and others) about a year before a given census, which means that if a development was not constructed by 2009, it was pretty unlikely to have an AGEB delineated around it.  And, where there’s no AGEB boundary, there simply can’t be any Censo 2010 data to fill it up.

That’s why we developed our own boundaries called Growth Grids, and methodologies to “fill them up” with demographic estimates.  (Readers who have been keeping up with GeoAnalitica can probably recite that whole line of logic by heart.)  This gives the analysts who need it the most – i.e., corporate site selection specialists – the data they need to rationalize a trade area and to evaluate its economics.  And it doesn’t take many Growth Grids to make a material impact on a trade area’s numbers.

Take Puerta Real, for example.  It went from non-existent at the time of Censo 2010, to a 2018 estimate of 1,589 households and 7,426 people.  That’s no small impact, especially considering this is a predominantly C-class area with a smattering of A/B – groups that many consumer-facing brands find a profitable core demographic.  (If you take a look at the embedded marketing materials and details from Puerta Real’s developer, you’ll see evidence of these social classes through the size, configuration and finishes of these new homes.)

If 7,000 “new” people sounds like a big deal to you, let us be the first to say, it’s not.  Well, it’s not nearly as big of a deal as 121,275 people, which are the “new” residents detected just within our Growth Grids, and just within the SLP metro area.  That’s a big deal.  And San Luis Potosí is just one of dozens of growing medium-to-large cities across Mexico, places that once might have been an afterthought for multinational retailers but that have become respectable multi-unit markets in their own right.